US DOJ okays Amcor acquisition of Alcan Medical Flexibles
The US Dept. of Justice has given final approval to Australian converter Amcor’s purchase of Alcan Medical Flexibles operations for $66 million with the deal closing on July 1. The business consists of four plants in North America, and approval is conditional on divesting the Marshall, NC, facility. The combined Medical Flexibles business has annual sales of about $115 million. The three operations to be retained by Amcor produce a range of medical flexible-packaging products.

Amcor to shutter PA contract-packaging plant, eliminate about 100 jobs
In related news, the Australian converter will close its pharmaceutical contract-packaging plant in Bethlehem Township, PA, by November 2010, reports The Express Times. About 100 jobs will be eliminated. The closure of the Baglyos Circle plant, which was formerly owned by Alcan, Inc., prior to its acquisition by Amcor, is partly due to Amcor USA’s corporate refocusing on package manufacturing and converting. 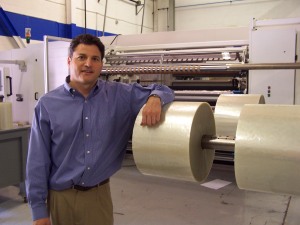 Preparations are well underway for the launch of ICE USA, set for April 6-8, 2011, at the Orange County Convention Ctr. in Orlando, FL. The first International Converting Exhibition (ICE) in North America has signed up about 120 companies so far, including major machinery suppliers such as Davis-Standard, NEW ERA, Polytype, Kroenert, Catbridge Machinery, Kampf, Lever and Dolci. A large number of specialist component/accessory suppliers has also set their sights on ICE USA next spring; among them: Maxcess Intl., Accuweb, Double E, The Montalvo Corp., Goldenrod, Circonix, StopStatic and Max Daetwyler.

Bob Pasquale, president of NEW ERA, is one of many planning to display running machinery. “We look forward to presenting new machine innovations next April at ICE, and I encourage my competitors and fellow OEMs to do the same,” he says. “We need a machinery-led show, and ICE USA is in a strong position to fill that slot.”

“Within the slitting/rewinding community, ICE in Europe has become a Mecca for machinery buyers,” adds Michael Pappas, president of Catbridge Machinery, “and we’re confident that ICE will command a similar position in the market here.”

“Regardless of how many of us (component suppliers) take part, the success of ICE USA is dependent on the machinery suppliers,” comments Ed Montalvo, president of The Montalvo Corp. “Their exhibits make the show attractive and help to pull the right quality and quantity of converters looking to invest. If machines are specified as a result, there will be a domino effect, and we will all benefit.” More info

Clearwater Paper selects Shelby, NC, for new tissue-converting plant
The Spokane, WA-based sanitary-products and paper converter has chosen Shelby, NC, as the location for its newest tissue-papermaking machine as well as seven converting lines capable of producing ultra grades of private-label tissue products. Clearwater Paper will move forward as soon as possible with construction of the facility, including the 200-in.-wide tissue machine, at an estimated cost of $260 million to $280 million. More info

New Presstek Germany subsidiary to strengthen digital-print position
The CT-based supplier of digital offset-printing solutions has bolstered its European presence with the formation of Presstek Deutschland GmbH. This new subsidiary will serve customers in Germany, Austria and Switzerland with its headquarters in Mühlheim am Main. The operation follows the recent formation of Presstek France and Presstek Asia and will report to Presstek’s European organization in London. More info